Needing five hours to do the deed, Steve Poor and Dayle Turner reached the summit of Kamaohanui today. Kamaohanui is a peak (elev. 3450 feet) along a ridge that leads to Mauna Kaala, the roof of Oahu.

I woke this a.m. feeling tired and aching. I had come down with a low-grade fever and nasal congestion a couple days prior and had been fighting to shake the bug. Steve called me earlier in the week. "Let's try for Kamaohanui on Saturday," says Mr Poor. Pat Rorie, one of our usual hiking comrades, is camping at Pahole so he can't be with us. Wing Ng is banned from trail clearing so he's out too. So it'll be Steve and I. Then this bug hits. I won't be in top shape. Doubts clutter my mind. "I'll break it to Steve on Saturday morning," I tell myself. "He'll understand." 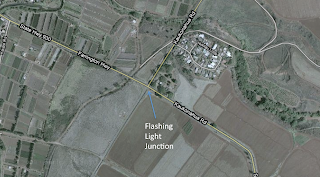 The day arrives and I drive over to Waialua to meet Steve at the flashing light junction (see map above). Rendezvous time is 8 a.m. It is then that I tell Steve I'm feeling less than good. He extends his sympathy and then says, "We'll see how far we can go." Man, that guy can't take hints. And like a fool, I tell him I'm still going with him. Bonehead.

We enter via a covert route inland from the flashing light junction in Waialua. It's 8:30.

At one point, we veer left up a paved road that leads to a ranch house on a hilltop. About a 100 meters up this road, we reach the Ito Ditch and a pipe bridge that crosses it.

We turn left to follow a trail along the ditch. In a minute, we reach a point where the ditch drops into a gully. We tightrope on the concrete edge of the ditch to get around its end, and then pick up another trail that leads us to a fenceline. We hop over a fence topped with barbed wire and land on a ranch road (dirt).

We follow this road until we reach a locked gate. We hop over this and follow the ranch road as it heads mauka up the broad ridge.

Steve and I have no idea whether we're on the right ridge to Kamaohanui. "We can come back again if we're on the wrong one," says the unflappable Steve-meister. 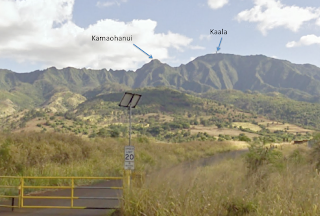 So up we go, following the ranch road, severely rutted in areas and which can only be travelled on foot, on dirt bikes, or on quads. Plenty of cow pies on the ground. No makers of these pies sighted, however.

We reach the upper boundary of the ranch property at a fenceline. It's 9:30, an hour after we left the cars. We rest in the shade of some eucalyptus trees. There's also a large fruit-bearing lama tree there. Steve is jazzed about the lama. He fills up a plastic bag with fruit. He'll share these with his students (he teaches at a local high school). He even eats one. "It's pretty good," he announces. "You want to try?"

No thanks, I say, citing the quasi-flu bug I'm battling. Actually, I'm not much of a fruit eater, particularly those from native Hawaiian plants.

After that, we hop over the ranch fence and continue up the ridge. We see pink ribbons every 10 meters. The ridge is mostly open. No need for ribbons so often. "Must be some novice hiker," I theorize.

"Yeah, what a waste of ribbons," Steve adds.

Later we spot that string we've seen on other ridges. We also notice numbers written on the ribbons. "Ahh, ungulate impact study," I say.

We pass through a grove of Formosan koa and continue climbing, following goat trails up the ridge.

Steve is safety conscious and will subject himself to abuse by flora to avoid sections he deems too exposed. I, on the other hand, will subject myself to exposure (but not extreme kind) to avoid long, taxing bypasses that involve crashing through brush and hanging onto trees.

He does the bypass thing several times while I climb up and over rocky dikes. At one steep section, I go up what I judge a relatively safe rocky dike. I urge Steve to follow but he refuses, saying he'll look for a bypass contour.

Right at this point, we spot about a dozen goats, including a couple of large billies. One large male stands poised on a rock about 20 meters away. "If I had a gun, I'd shoot you," I yell at the defiant goat. The buggah just stares for ten seconds before bounding away off onto a contour trail off the ridge. Some nerve.

Steve, judging the goats wiser than I, follows the contour route they take instead of the direct climb of the dike I use. Bottom line: we both reach the point beyond the dike in good shape. That's good.

We keep climbing, stopping at times to yell out to see some of our hiking colleagues going up Dupont can hear us. They do, and we hear return whoops. Later, one of our friends says he saw me and my red shirt "plain as day." I'm hiking without glasses or contacts (my eyesight is 20-100), so I'm visually impaired. I hear 'em but can't see 'em.

At this point, we see no more pink ribbons. But I do spot an old blue one. "Hey, someone's been up here," I say to Steve. We later find a couple of old orange ribbons in the last couple hundred meters of the climb to the summit, but for the most part we find little to indicate that anyone has pushed through to the top via this ridge in a while.

At about 11:30 (three hours from launch), we reach the point of the ridge where we leave dryland forest behind and enter the uluhe and blackberry zone. The goat trails we've been following also disappear.

"It's Howdy-Dowdy time!" I yell out, trying to make light of the torture Steve and I are about to subject ourselves to. We have one machete between us, so we take turns as ramrod, trying to forge a path of least resistance. When I'm in front, I swear a lot. "Give me a flippin break," I say to the bushes, as if they can hear me. We also ribbon this section pretty extensively. Future return hike someday? Maybe.

The blackberry is unforgiving, and blood appears on my forearms and kneecaps. Like an idiot, I don't stop to put on the long pants I have in my pack until later. Steve, meanwhile, hikes shirtless for a long spell through the uluhe and blackberry. "Either he's tough as hell or a complete idiot," I think to myself. We do a lot of hands and knees crawling. Shades of Paoao Ridge. Ahh, it's Howdy-Dowdy time.

At several points, we emerge from the uluhe and blackberry abyss into beautiful clearings. One has what appears to be a goat or pig nest right in the middle. Maybe it's home to some X-File alien creature, I think. Man, I'm losing it.

Earlier, we set a turnaround time of 1 p.m. At 12:50, we arrive at a clearing on the ridge where we finally can see the summit of Kamaohanui (intermediate puus on the way up obscure it). It's maybe 200 meters away but there is a steep climb through thick, daunting vegetation to get there.

Steve announces that we should stop to eat lunch and return another day to complete the climb. I agree to eat lunch but nix the plan to terminate the summit attempt. "We're too close to turn back now," I say. We debate the issue. Steve thinks if we try to summit, we may make it but not make it back to the cars before dark. I point out that the descent will certainly be faster than the climb up. Plus (and here's the clincher), I agree to ramrod the final ascent.

So we eat a 10-minute lunch. That done, I put on my long pants and gloves. Then proceed to use my body as a battering ram through more uluhe and blackberry for the next 25 minutes, the time we need to reach the summit of the peak Steve says he's looked at and wanted to climb for thirty years.

There's a large, grassy clearing there, maybe 20 meters x 15 meters. Someone has cut large branches of trees using a saw. No trash spotted. Good place to camp. The climb up with big pack would be hard. Good views of Kaala, Kalena, and the Schofield firing range. The climb up the ridge to Kaala looks formidable, with a big drop from Kamaohanui and then a big climb through thick vegetation to reach Oahu's highest point. Surely, there's plenty of blackberry on the way too. How do you spell s-u-f-f-e-r?

"Right on," says Steve when he arrives.

We shake hands, admire the views for five minutes, and then head back down the way we came up. We also hear some of our colleagues whooping out from Kaala (the photo above was taken from Kaala; the peak at the far right is Kamaohanui)

We need three hours to return to our cars and are out by 4:30. Some of the crew who've ascended to Kaala on Dupont have gone already. Others are hanging out, resting and partaking of refreshments provided by some kind folks. Great to get off my feet and guzzle some cold drinks.

Who knows what Steve has in mind next.