For years, Mount Waialeale on Kauai has been the undisputed wettest spot in the Hawaiian Islands. A recent report, however, made it clear that the Kauai high point (or almost-high point) is now # 2.

According to one source, access to Big Bog "is nonetheless difficult, requiring either a helicopter or two days each way on foot, partly through dense montane rain forest. As a result of this remoteness and the lack of trails into this area, these bogs have until recently received little disturbance to native biota compared to most Hawaiian habitats. Feral pigs arrived into the area in the early 1970s and their heightened activity through the 1980s has caused the loss of native plant cover and subsequent invasion by of alien plant species."

A two-day hike in and two days out? Sounds like an extreme hike. 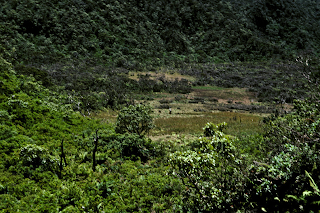 Pic above is of MidCamp Bog by B. Gagne.

From an info-gathering quest, hiking access from the coast would begin near to Waianapanapa near Hana, Maui. No beta on anyone having done that before and probably would be smite with access issues and big-time bushwacking. The other access would be from the rim of Haleakala Crater above Paliku (via the Laulu Trail). From/near Pohaku Palaha (8105 ft), the descent would begin, taking one east down Kalapawili Ridge past Lake Waianapanapa (6643 ft) then past "New Bog" (6250 ft), past Greensword Bog (6102), then MidCamp Bog (5446 ft) then to the wettest spot Big Bog (5413 feet). The fact that this is the wettest spot in Hawaii and the fact that there is parade of Bogs to get past on the way down should make it clear that this is would be a heckuva hike down and then back.
Posted by Koolau Jim at 1:07 AM

Email ThisBlogThis!Share to TwitterShare to FacebookShare to Pinterest
Labels: maui