The 2010 HTMC calendar is really a thing of beauty, but there is outdated information that I would like to see corrected. On the last page (bottom flap of Club Facts & Trivia) it reads, "Pete Clines has also attempted this climb to True Manamana but fell short of the summit. As far as we know, no one has conquered the summit of True Manamana." I am pleased to report that these statements are no longer accurate, as two HTMC members had lunch there this past Saturday! 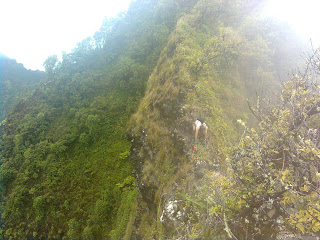 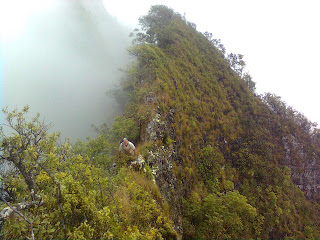 With an EARLY 6:30am meeting time, Laredo (Rainbowman) Murray, Nathan Yuen, Chris Cheng, and I prepared for a long day of adventure. By 6:50am we were leaving the cars (by Kahana Bay) and were heading for the "Cemetery Route" up the Manamana club hike. Clouds and on-and-off rain throughout the day meant the ground would be muddy and slick for the duration.

A little before 9am we reached Turnover at about 2000ft and had a short break.
The club route would reverse direction here, and loop around towards the coast
and "Crouching Lion." But for us, the direction was to continue further inland
towards the peak known as "True Manamana." Immediately after leaving the cut
trail at Turnover, that would normally mean a tiresome battle through dense
jungle, hidden drop-offs, and painfully slow progress just to get to a point at
1900ft where the ridge narrows and drops all at once, thus providing killer
views of True Manamana, Kualoa Ranch, Ohulehule, etc. But on this day we did it
with relative ease. The reason: last Sunday, June 27th, Chris and I had come up
here with August Smith and Tricia Higa and we had made the 1900ft viewpoint our
goal. (I discovered this spot in 2003.) With machetes, loppers, and handsaws,
we had opened a safe route that would turn a 2 hour+ bushwhack into a 25 minute
stroll. So, this Saturday, we were at the 1900ft viewpoint before 9:30am - lots
of time for a summit attempt. (In 2003, Brian Baugh and I did not even leave
the cars until 10am, making a summit attempt impractical if not foolish.)

Nate's plan was to take photos of the summit and our adventure and perhaps
continue a little further along the ridge - hopefully we will see a write-up
from his perspective? Chris had planned to attempt the summit climb with us,
and his fitness level was never in question, but his fear of heights got the
better of him not far into the initial descent into the saddle of the ridge. He
would later return to the 1900ft viewpoint with Nate.

Not long after Chris' departure, Laredo and I encountered the first significant
challenge of the day: a long, steep drop that involved loose boulders. I set a
rope on the sturdiest boulder and began down after knocking loose the worst of
the crumbly rock. Near the bottom, the rope was a bit short, and I needed to
trust a tree branch to get me all the way to the next piece of solid ground.
Laredo would soon follow after knocking loose one more microwave-sized rock.

The day continued like that. Narrow, crumbly rock sections with no room for
fear or error. A lot of the challenge was that the limited hikable surface was
overgrown with vegetation of the not-so-helpful variety. There were a few
points where we could hang onto "trumpet" trees and swing around to the other
side of the tree, but more often the branches were brittle and we had to work
our way THROUGH the obstruction. (The cuts on our forearms tell the tale.) One
memorable spot involved dropping off the rocky ridge onto a thick tree branch
growing out of the Kahana side of the ridge...working your way along the
branch....and then lowering yourself back onto firm ground. (Reverse process on
the return.) In fact, Laredo commented that he was crawling more than hiking on
this adventure. You'll notice that I had no trouble titling the photos
accordingly. :)

We encountered no "deal-breakers," though. There were no climbs that were too
steep, for instance. Instead, the route was "consistently dangerous." Lots of
short, nasty ups and downs. Furthermore, Laredo carried 50ft of rope while I
carried over 200ft. This made us more confident about our return, but in the
end, I affixed only two ropes - the long one just mentioned and a shorter one
just below the summit after free-climbing an eroded pitch.

We did find 3 or 4 cables along the ridge - all concentrated in an area not far
after the low point in the saddle. I believe these were likely Al and
Charlotte's as they had made an attempt starting from Kualoa Ranch using a steep
side ridge that climbs to the saddle that we were on. (Brian and I used the
side ridge as an emergency escape in '03 when it was 4pm and we were still an
hour or so from the summit.)

These "found" cables were primarily attached at two points and used as
horizontal guide wires to help you contour along narrow rocky outcroppings on
the ridge. Beacause of their age, they ranged from somewhat helpful to
counterproductive. In one photo, you will see "Laredo tunneling" under/along
an overhanging rock. I had already crawled past this part....and it was then
that Laredo discovered that the cable was no longer attached at the far end! We
found part of a rusted piton that had broken. Glad I was not pulling on it!
This discovery, combined with the apparent age of the cables, led us to avoid
them as much as possible. There was one cable that guided you past a puka rock
(got a photo of that) just prior to the section with the unattached cable. You
can see just how thin the top wall of this is - maybe the thickness of my
waist. On the way out, I unknowingly walked right over this puka! I was very
lucky that it did not break.

I was not so lucky, though, at one point just prior to the puka. While edging
along the side of one of those rocky outcroppings, I got overconfident about my
footing....and continued along even though I knew I was in a bad spot to fall.
In an instant, my footing was gone, and I slid a good distance (20feet?) before
friction and some vines(?) caught me. (I admit to letting out a scream...but I
thought for a second that I was a goner.) Laredo raced to catch up with me and
hopefully rope me back up, but I was able to edge my way further along (slipping
a little further downhill in the process) to a spot where the pitch was gradual
enough for me to pull my way back up to the ridgeline.

With a little more respect for the ridge, we pressed on, past the puka rock and
the overhanging rock. Soon we crossed another prominent narrow
dike.....finessed our way up an eroded spot - this is where I left the second
rope once I got up...and we could soon taste the summit. Our hope was that Nate
could get a photo of us on the summit from his vantage point at 1900ft, but as
we got near our goal the clouds began to return. With 25ft of bundled rope held
in my teeth, I sped up the final climb on all fours to beat the clouds.
Denied! The clouds got there first. But nevertheless, at 12:20pm I was
standing on the top of the elusive peak! A couple short minutes later and
Laredo would be the first senior citizen to summit this mountain. (Just
teasing, buddy, but I still find your abilities remarkable...at any age!) We
celebrated accordingly, whooped out to Nate and Chris, and sat down for lunch in
a flat area a couple feet below the highest point. Just over 1600ft by our
altimeters. Not a high peak by any means, but a very cool one. We marked the
summit with three pink ribbons, called birthday boy Dave Webb in Oregon, and
took a few pics in the clouds.

By 1:15pm we were still not able to see Nate at 1900ft, and we reluctantly
decided to head back. Of course....not 10 minutes after leaving the top, the
clouds lifted. Go figure. Laredo and I reminded each other that we still had
to play it cool to ensure a safe return, and did not let down our guard. At
least we knew what to expect, and had lots of rope if needed. (It wasn't.)
Going back the weather was a little more agreeable for photos, and I would take
several opportunities to film Laredo en route.

In an hour we were by the bail-out side ridge into Kualoa...not long after we
were climbing the long rope we left behind....and by 4pm we were greeted by Nate
and Chris at the 1900ft viewpoint. We were all excited to safely re-group and
we hung out for a while to rest, snack, and talk story about the climb.
Afterwards, we pushed a good pace back to Turnover, paused for a minute or so,
then began down the trail to the cemetery. The club route has never seemed so
safe! Just before 6pm we were back at the parking lot, thus ending an EXCITING
11-hour day on the trail.

Much thanks to my new climbing buddy Laredo. I'm glad you were foolish enough
to join me for this one.

Thanks to my trail clearing buddies Chris, August, and Tricia. Trying to clear
from Turnover to 1900ft and then summit in the same day is too time-consuming
and exhausting.

And perhaps most thanks should go to Nate for "calling me out" in the calendar.
This peak had slipped off my "to do" list for several years once Brian moved
away...but being known for something I failed at was just too much. :) Thanks
for getting me motivated, Nate! Can I hold my head up now? ;)

Sorry for all the photos, but I couldn't decide which were the best. There's
too many cool ones! If the narrow spots don't look as imposing as you might
expect, remember that wide-screen monitors draw out the picture horizontally and
have the effect of making the ridge less dramatic. I have two screens
side-by-side at work, and noticed that the photos are much more exciting (and
accurate) on my regular monitor versus my wide-screen laptop monitor. Enjoy.