THE INSPIRATION Having witnessed footage last year on the Discovery channel of a competition dubbed "The Eco-challenge", an intense combination of activities including nocturnal mountain climbing and paddling through rough seas, I was inspired to participate in something similar here in Hawaii. THE CHALLENGE On Thursday, March 18,1999, I received an e-mail message with the subject "wanna challenge?" from Gene Robinson inquiring about my availability in late April/early May for a backpack trip up Mauna Loa (lit. "long mountain" and the largest volcano in the world) via the Ainapo (lit. "dark land") Trail. I didn't know much about Ainapo, but as Gene filled in the details my desire to conquer the route only increased. THE AINAPO TRAIL - A BRIEF HISTORY "During the past two centuries several trails have been used to ascend to Mauna Loa's summit. The oldest, now known as the Ainapo Trail, extended 34 miles from the old village of Ka
1 comment
Read more 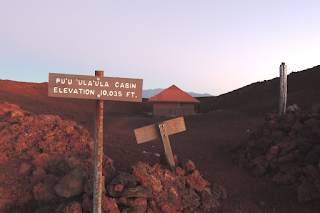 Saturday, June 25th, 2005, I was joined by three good friends for a grand five day adventure on Mauna Loa.  I call it an adventure because there isn't really any other good way to describe what we did, it was certainly more than just a normal backpacking trip for me.  Besides myself, the other participants were Cheryl Batangan, George Privon, and Matt Wordeman.  Cheryl and George are HTMC members whom many of you probably know and Matt is a friend who lives in Kula.  The trip went something like this: June 25- Meet at the airport for breakfast and fly to Hilo.  We were picked up at Hilo International by the one and only Stan (the Man) Atkins of Hawaiian 'Kine Adventures.  For an extremely reasonable fee Stan dropped us off at the end of strip road at the Mauna Loa trailhead.  He had already picked up fuel and our permits the day before so we were able to bypass the National Park and save a bit of time.  We got underway at 11:15 am under beautiful sunny skies and
Post a Comment
Read more 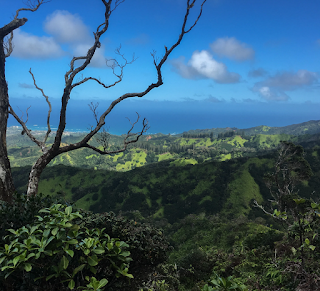 It's been years since the HTMC has hiked the Kahuku Trail. Perhaps some long-time members might know when the club last hiked Kahuku. My guess is that it's been at least 20 years. Access restrictions at the makai end of the trail might have led to its disuse, but recent exploratory jaunts into the area by club members have not only resulted in the re-opening of the route but also a solution to the access bugaboo. What does that spell? K-A-H-U-K-U. The club will be hiking it again. Today, a group of us gave the route a nice going over in preparation for the members-only club hike on Sunday 10/7/2001. The indubitable duo of Jay Feldman and Wil Kawano will coordinate the hike. Today's TM roll call: Mabel Kekina, Jay Feldman, Wil Kawano, Bill Gorst, Mike Algiers, Kay Lynch, Brandon Stone, Dick Cowan, Brenda Cowan, Gordon Muschek, Connie Muschek, Tom Yoza, Ken Suzuki, June Miyasato, Grant Oka, Georgina Oka, Jason Sunada, Ed Gilman, Art Isbell, Larry Oswald, Kris Corliss,
2 comments
Read more 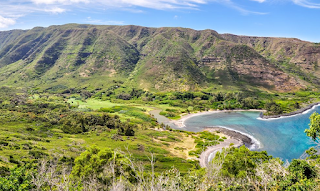 Exploring the remote Molokai wilderness - Traversing the divide between Wailau and Halawa Valleys by John B. Hall  PART I  One of the earliest outer island trips I took with the Hawaiian Trail and Mountain Club was a short jaunt to Molokai sometime in the early 1960s. We flew to Molokai and were driven to Halawa Valley. There we donned our packs and hiked up the jeep road that runs north, parallel to the coast, climbs into the hills above Lamaloa Head and then winds for 4 or 5 miles through the hills above the north shore of the island until it ends in range land at the edge of scrubby native forest near a small peak called Pohakuloa. Here we camped in the cow pasture. I had some difficulty in finding a place to sling my hammock, since the pasture was essentially treeless, but I finally found a small dry wash with the stumps of long dead trees at appropriate distances apart on either side, and hung my hammock across this. I can't remember whether we spent 1 or 2 nights in this
Post a Comment
Read more 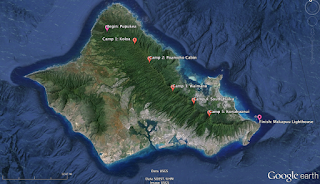 Author : Ryan Moss" < m.l.d.video@gmail.com > Ryan Moss   As for my journey... I would first would like to thank anyone whoever cleared a trail, tied a ribbon as a trail marker, pioneered those saddles and just wasn't afraid to go out and explore. I owe a huge thanks to first off my family for always being there to support me throughout this journey. Kris and Martina Harms for always making me feel at home and giving me a place to stay every time I flew in to attempt this journey. Not only taking me in, but helping me through the healing process as I had to lick my wounds a few times. Windy Purdue for dropping me off at the trail head in Pupukea on December 27th  (2013) at 7am and being there to pick me up at 6pm on January 1st 2014. The same goes for Kris and Martina who greeted me with a champagne shower on that final day. I need to also thank Fancis Joy, Marcus Greigo, Laredo, Jeremy Kreis, Thomas Engle, and Katie Ersbak for helpin
Post a Comment
Read more
More posts