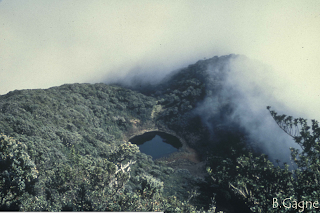 Lake Waianapanapa -- Photo by B. Gagne

With a layover day at Paliku (lit. "vertical cliff") came a leisurely morning. Although Paliku was still engulfed in shadow, the early morning sunshine lit up the massive ridge containing Haleakala Peak, the lava fields of the crater floor, Pu'u Maile, and Oilipu'u beautifully.

At 9 a.m. Arnold, Chris and myself set out to explore the territory above Paliku along Kalapawili Ridge (part of the crater rim) in hopes of locating (and swimming in!) Lake Waianapanapa. We were blessed with another perfect day weatherwise (a light breeze, clear blue skies with the exception of a few cirrus clouds, an abundance of sunshine). A sign stating "unmaintained trail" behind the campground denoted the Lau'ulu trailhead and we headed north on the footpath. I brought ribbon to mark potentially confusing junctions for Inger and Laura who would be hiking Lau'ulu later that morning. We gained elevation gradually and passed through a tunnel of vegetation. "When they say unmaintained, they really mean it!" I told myself as our group steadily worked our way toward the crest of Kalapawili.

Eventually, the route curved west and opened up featuring nice views down into Kaluanui, a crater nestled against Kalapawili Ridge. Although smaller and much less vegetated, it reminded me of looking down into Ka'au Crater from the ridge that ends at the peak Palikea on the Ko'olau Range.

Upon returning to its original northern heading, the trail became a graded contour cut magnificently into the sheer pali high above the lava fields. Arnold, Chris and I paused in awe of the spectacular vista of Haleakala Crater. We could see the various cinder cones, the Sliding Sands switchbacks and the summit in the distance. We also marveled at a long switchback above the contour as Arnold asked "We're going there?!". I responded with an enthusiastic "That's right!"

Gaining the broad crest of Kalapawili via the long switchback and a much shorter one, the three of us proceeded east along a summit footpath which contoured on the Hana Highway side of the ridge. We were afforded occasional views of Maui's northshore, spotted a pair of nene geese above us near the crest and passed through a gate in a wire fence.

Once the trail traversed the ridge top not far from Pohaku Palaha (elev. 8,105 ft), we sat down at 10:15 a.m. to enjoy incredible views of the light green Paliku campground far below, the ridge connecting Pohaku Palaha and Pu'u Kuiki, Kaupo Gap and, in the distance, Mauna Kea/Mauna Loa of the Big Island above Pu'u Kuiki.

About half an hour later, Chris, Arnold and I continued east, climbed over another wire fence and descended gradually a distance through prairie-like terrain in search of Lake Waianapanapa (I had a topo map of the area in my possession to guide our party). At another superb vista on the crest we halted again to gaze down into vast, lush, pristine, remote Kipahulu Valley and couldn't help but notice its sunken eastern floor stretching makai to a gap in the valley. Also visible to the east of Kipahulu due to the excellent visibility were craggy Pu'u Kaumakani (elev. 4,576 ft) located in the middle of the ridge that separates Kipahulu and Waihoi Valleys, Waihoi Valley, much of the Hana Forest Reserve and a small stretch of Maui's east coast not far from Hana. "This is why Maui is called the valley isle" I told myself.

Confident that we were closing in on Lake Waianapanapa, the three of us departed the crest moving steadily downward through the prairie occasionally startling a few nene [honk! honk! honk!]. Not anticipating such a lengthy day hike, Arnold's water supply reached a low level but Chris provided some of his to make sure Arnold had enough to get back to Paliku. At this point Arnold decided to return to camp not only due to his lack of water but also because he did not bring lunch.

While Chris assisted Arnold, I scouted the lower environs and discovered a green 10' by 20' cabin nestled in an open tract of land between thick native vegetation. Chris caught up to me and one at a time we climbed over a barbed wire fence. Still holding out hope of locating Lake Waianapanapa, the two of us explored the terrain below the cabin only to find thick native rain forest including several lapalapa trees scattered about the flora (among the biggest I've ever seen in Hawaii). We ascended gradually to the shelter and once at the locked building peered through the kitchen window and identified bunks and a poem attached to the wall entitled "Ode to Rain", an obvious reference to the normal weather pattern of the region. Fed by a roof catchment system, eight sizeable plastic barrels were located adjacent to the southern wall of the structure, all filled to the top with water.

Chris and I replenished our supply and, with lunchtime upon us, departed the area backtracking to the Kipahulu overlook to consume our food. A pair of nene flew directly over us as we sat on the crest and admired the outstanding sights. During the break I noticed a small body of water almost directly below on the floor of Kipahulu Valley. I pointed it out to Chris while exclaiming "Hey, that looks like a lake!" (duh!). That evening we found out that the lake we saw was the one and only Lake Waianapanapa. Chris finished his meal, hung around a while longer then headed back to Paliku. I reluctantly departed about half an hour later and reached the Lau'ulu Trail/summit trail junction at 2:48 p.m.

With so much time remaining in the day and the excellent visibility still present, I decided to head west along Kalapawili Ridge with aspirations of reaching the summit of Pu'u Hanakauhi, the massive mountain which dominates the vista from Holua Cabin and the Halemau'u switchbacks. Initially, I contoured on the Hana highway side of the ridge, an occasional blue ribbon marking the route. Eventually, I gained the crest. The summit looked far off and fatigue was setting in. Nevertheless, I pushed myself determined to gain the apex. I ascended gradually over the open broad summit crest and rugged rocky terrain surprising many chukars on the way.

Arrived at the summit of Hanakauhi (elev. 8,907 ft) at 3:48 p.m. and descended a short distance to a better vantage point where I enjoyed sweeping views of the entire Haleakala Crater from Paliku to Ko'olau Gap including Pu'u Kuiki; Kaupo Gap; Haleakala Peak; the massive ridge containing Haleakala Peak and Kumuiliahi; the various cones, pu'us and network of trails on the crater floor; the Sliding Sands switchbacks; Pu'u Ula'ula (Red Hill), "the summit of Haleakala at 10,023 ft"*; Leleiwi Pali towering behind the Holua Cabin; and Ko'olau Gap (filled with white cumulous clouds). Truely a top of the world experience!

Took pleasure from the awesome panorama until 5:07 p.m., then began heading back to the Lau'ulu Trail/summit trail junction. During the return leg I noticed a band of white cumulous clouds to the north (that I was hiking above them) and said to myself "there's nothing like hiking above the clouds!".

Reached the top of the Lau'ulu Trail at 5:55 p.m. and enjoyed descending the spectacular long switchback and contour section. Gazed down into Kaluanui Crater once more and completed the return trip to Paliku approaching my tent at 6:35 p.m. I immediately grabbed my pans, utencils, and dinner entree and walked a short distance to Laura's tent where several members of our group were gathered for the evening meal.

After dinner at 7:31 p.m., Emil, a good looking blond haole dude in his early twenties and an environmental assistant for the national park, invited us to the ranger cabin and all but John Darrah gladly accepted. The rustic shelter, built in the 1930's by the CCC, contained twelve bunks (four stacks of three beds) and a stove (the temperature inside was a balmy 70 degrees fahrenheit) among other things. Our party sat around a large table and consumed wine and food items which Emil prepared. When the young man joined us, he shared some interesting information about Haleakala including that fact that 42 miles of fence surround the crater (it is possible to circumnavigate the entire crater!) and Lake Waianapanapa is in Kipahulu Valley (it is a $10,000 fine to be caught in or near the lake). Charlotte inquired about various plants she observed during the day and Inger quized Emil regarding the native birds she spotted. The environmental assistant came across as very knowledgeable in these areas.

Unfortunately, the nine o'clock hour came and went and with it most of our group. Before departing the cabin a few people helped wash dishes and cleanup. I engaged in star gazing for as long as I could tollerate the cold, then retreated to my tent and lost consciousness at 11:20 p.m.
Posted by Koolau Jim at 12:20 PM

Email ThisBlogThis!Share to TwitterShare to FacebookShare to Pinterest
Labels: maui