It's Been Awhile -- Kahuali to Kalihi Saddle

Not sure how many years it's been. Maybe 30 or 40. But the section of the Koolau crest from Kahuauli (Bowman trail terminus) to the saddle atop Kalihi Valley (above Wilson Tunnel) has been done by Dave Concepcion and friends. He reports:

There are three saddles on the Ko'olau mountain range on the island of O`ahu. All three have trans-Ko'olau tunnels running underneath that are part of highways that link the windward side of the island to Honolulu and Waikiki. These are the Moanalua (H-3), Kalihi (Likelike), and Nu'uanu (Pali) Saddles. Numerous hikers have documented their hikes on the Moanalua and Nu'uanu Saddles while Kalihi remained virtually untouched. Hawaii hiking legend Dick Davis called the section between Pu'u Kahuauli and the Kalihi Saddle as no-man's land. Pete Caldwell and Don Fox ascended to the saddle via a steep trail that was situated above the Likelike Tunnels on July 14, 1997. Pete Clines and company did a loop from the highway to the saddle and back in spring of 2011. Kaleo Lancaster and his crew ascended to the saddle via a powerline trail on June 25, 2011.

Posted by Koolau Jim at 8:18 PM No comments: 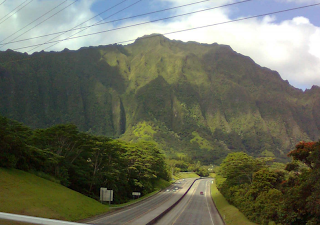 Some time away from the mountains had me aching for adventure. Thought I would check out this one to scrape the rust off. Turns out it had a little bit of everything: an obscure start, brittle rock, crawler’s ledges, and some ridiculously steep slopes. It was also overgrown; with the upper half being a complete bushwhack. And starting the actual climb from ~600’, there was about 2100’ of elevation gain in a VERY short distance. All told, it was a grueling ascent And most refreshing.

8:15 I left the car parked at the Golf Course/Church. Not sure what it is used for these days. Passed by the waterfall, and eventually reached the point where I would start the ascent. And I am being vague on purpose. This route is very dangerous. Although MUCH less taxing now that is has been cleared, there are a couple critical spots that suffer greatly with each passing hiker. And these spots were horrible BEFORE I further damaged them. Fair warning.

The route can be imagined in the photo above. It essentially runs straight up the center to the summit. (This photo was taken on a much sunnier day than the one of the hike.)

A steep, slippery climb - complete with unstable rocks – soon led to a wall that was fragile and devoid of firm handholds. I chose a contour, which was steep enough to pose its own problems. I was literally leaping from one tree root to the next. When I could contour no more, I resumed climbing on a nasty pitch with nothing but loose soil and rocks. I made the error of looking down at this point and was not encouraged. My feet kept slipping and had I built momentum here it would have been ugly. The trick that got me to the top of this section was to dig out the soil and loose rocks until I got to anything that resembled a solid, flatish surface. A final leap of faith got me to a branch that was gracious enough to support my weight. (The lower end of this branch already snapped on an earlier pull.) Once at a relatively secure spot, I was able to photograph the sheer Pali to my left. 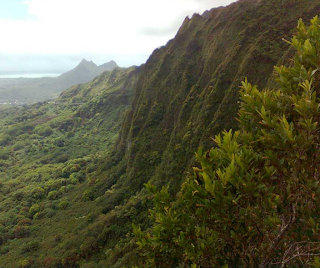 Now on a very narrow ridgeline, I had to battle the greenery with my machete to make any progress as a misstep to either side would suck. The view to my right shows just how sheer the drop is. 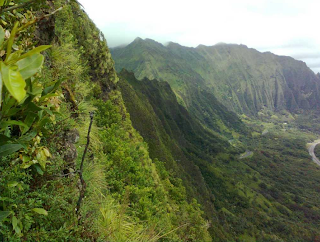 The narrow but heavily forested stretch continued for a bit until the ridge started to curve. All at once the ridge was so narrow that I had one leg easily dangling on either side as I scooted my way along it. A true “crawler’s ledge!” Aside from grasses and one or two ie ie vines, it was rather bare. And the rock was so rotten that it was falling off left and right as I inched along. Then a surprise ahead: a notch. It was a fairly shallow one, but I had to carefully flip around on the narrow ledge to descend into it with my body hugging the wall. No solid grips, so I slid down it like a slug. The drop on the west side was imposing but “padded” with trees, but the drop to the east side was dead vertical. In the notch, I was forced to stand an inch away from a 100-foot-plus dry waterfall chute that bottomed out into the nearest hanging valley. Climbing up the mauka side of the notch meant trusting ie ie vines – not a preferred climbing aid - and I had serious doubts about the success of the climb at this point. Visions of a recent climbing tragedy cluttered my thoughts. But I was here to overcome this, so on I went.

Out of the notch, a rain squall blew in on strong winds and I was forced to hunker down for about 5 minutes until it passed and I could safely continue. Moving along, the route began to widen. Just before noon, I could see a false summit ahead with a curiously steep face. I wondered if there would be enough strong vegetation to allow a direct climb.

After much struggle and sliding downhill a couple times, I ascended in an irregular pattern and found enough scattered patches of uki uki grass to use as handles. My feet slipped around so much that I basically pulled myself up this wall, using my legs and body only to create some friction while resting. By the top of this wall I was beat. My right arm was particularly drained from all the machete action prior to this. But by 1:30 I was moving along on a more level stretch and as the clouds rolled in I noticed the infamous “W” on Lanihuli’s East side that has been tackled by a couple groups recently.

Looking ahead, I hoped that it was the actual summit that I could make out through the clouds

As I continued along the clouds began to lift and I was able to see the broad top of Lanihuli, confirming that I was almost there!

A little higher and I was treated to an awesome view as the clouds retreated even more.

Looking back, I was out of the clouds again, and could see the steepness of the route behind me. 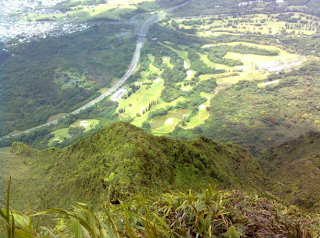 At 2:15 I reached the summit after some final pulling and slipping. I rested for a short while before heading west to eat lunch at the junction with the leeward Lanihuli trail. En route, I looked back on the upper part of the taxing climb.

After enjoying the summit for a short while, I packed up to leave and was headed leeward at 2:45. (My initial plan was to descend via Lanihuli East, but I was too drained to give it my full attention.) In about 20 minutes I was at the junction with a ridge that drops down into Moole. Last April after ascending Lanihuli East I bushwhacked down this same ridge and it was virgin territory at the time. But I heard that someone has recently been looking for a trail from Moole Valley up to Lanihuli and that he eventually found an old route and improved it. As I guessed, it was this ridge. Lucky for me, I had a swath this time around, and I noticed fresh ribbons next to my year-old ones. Cool. Blasted right through all the uluhe, and then through the guava near the bottom.

Once at the stream, I followed the heavily marked trail downstream. Interestingly, this hiker chose to contour on the east side of the stream to avoid the tall waterfalls that must be bypassed. In fact, I could never even see the falls from this trail. My route last time kept me in the stream longer, before dropping steeply down the west side of the falls using guava for handholds. Either way, the two routes merge above the 7th falls, the one with the nice pool. No time for a dip, I kept moving.By 4pm I was at the first (last) waterfall. Sadly, a tree had fallen here and was hanging into the small but deep swim hole. I got to work with my hand saw….removed the fallen branches….and enjoyed a quick cooling before packing up and heading through the nearby tunnel.

Back along the Pali, I endured a 1.5 mile walk to the Lookout where the high winds were putting on their usual show. Then it was down the Old Pali Road, stopping to take a profile picture of the windward ridge I just got to know so well. 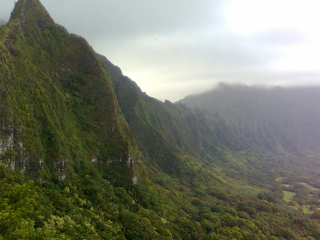