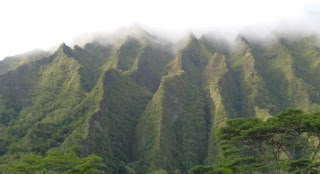 For years I have driven the Likelike Hwy and stared up at the jagged ridges on the windward side of the Wilson tunnel and wondered if they were climbable. Turns out (at least) one of them is.

During a recent decent of “Bowman East” with August, Duc, and Laredo… I had time to study those windward ridges from above and later from more of a side angle. Coupled with observations made from Hoomaluhia below, I picked out a route that had potential. So on the last day of 2011 I set off with Chenay to check it out.

We started from a neighborhood in Kaneohe around 9:30 – late start since the plan was only to “scout” it. With two major obstacles (H3 and Likelike) between us and the ridge, even the approach required some pre-planning. But a few looks at the topo maps and some common sense in regards to drainage meant we would avoid becoming roadkill.

With obstacles 1 & 2 behind us, the task was to find the ridge I had in mind. Looking up, I was reminded of why it was important not to get on the wrong one. 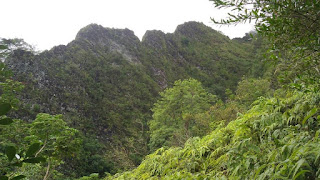 Many of the ridges in this area are razor thin, vertical in spots, and made of crumbly rock. No thanks. But by following muddy pig trails through the uluhe, we soon reached the base of our ridge. Super steep, the hike transitioned to climbing and scrambling right away. While trying to finesse my way above one particularly steep spot, my water bottle popped out of its side pocket and fell to an irretrievable depth. I was angry since that would leave me with only 1.5 liters for the rest of the day. (I usually would be carrying 4 liters for a climb like this, but this was a scout hike, remember?) At one point shortly after, the grade was near vertical and the handholds were a leap away from each other, so I dropped rope down to Chenay and coached her up to me. I should mention that her beloved Purple Vibrams weren’t giving her much grip, so she was barefoot for most of this time. I cringed at the thought of her injuring her feet (THAT never happens) but I only got the lecture about how she was born here and has tough local-girl feet…….

After removing my rope, we continued along on a short level section choked up with i’e i’e. Machetes came out, and shoes went back on. After a brief bushwhack, we were at the base of a steep wall comprised of loose soil, poorly rooted grasses, and the occasional ti plant or similar frail handhold. Add in a crumbly horizontal rock band for added challenge. 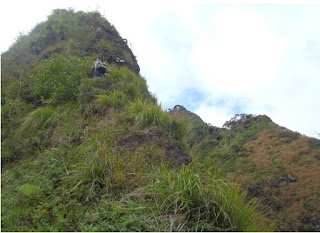 I got stuck pretty good on this one. While Chenay took photos of the incredible views around us, I made several attempts up different routes, only to find myself unable (unwilling?) to ascend further. Getting back down after each failure was taking a toll on my patience and energy, and I became noticeably agitated. After nearly an hour at this spot, I realized that it was coming up on 2pm. Not knowing what the ridge would be like up above, I knew that even if we made it past THIS obstacle, we might get stranded in the dark before the top. But I also did not want to come back another time just to find out that above this wall there was a deal-breaker obstacle. I did not want to descend, but I also did not want to risk my life (or hers) in a rash decision. Sensing my frustration, my sweet, caring girlfriend pointed to yet another nasty spot and asked, “How about over there?” Turns out she was even less excited about having to descend the way we climbed, and she was going to MAKE me get us to the top. Not wanting to forfeit my Man Card, I dropped my pack, shoved a hundred feet of webbing down the back of my waistband, and headed up a grassy slope with a ridiculous angle and a potentially sizable drop. Clawing my way up, I simply ignored the fact that there was nothing below me to stop my fall if my footing slipped. But somehow I made it, and got to a lesser grade where I could relax. A stunted tree gave me an anchor point for the webbing, and I tossed the roll down to Chenay. We maxed out the length of webbing, but she was able to tie it off to my pack before heaving her way up to the nearly invisible ledge I was coaching her from. Once she was safe, I hauled up my pack and worked my way over to her. We were now committed to reaching the summit.

From here we were forced to climb, of all things, a dry waterfall chute in a hanging valley. Normally this would be a no-go, but this one had a thin layer of some kind of plant that we used like a cargo net. Higher up, we got back into i’e i’e and other vegetation. 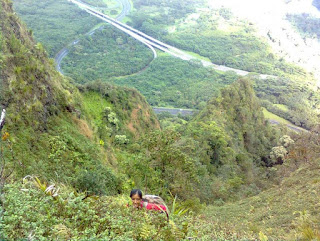 Once back on the ridgeline, we paused to check out the ridge that was paralleling ours. Very impressive, but we agreed we would rather not be on it. 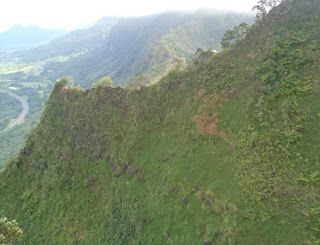 Just a bit higher up, we could look over it and spot the “Witch’s Hat” on Bowman East. 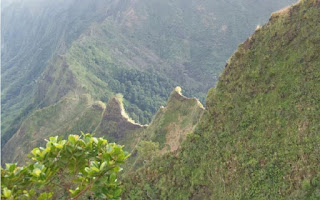 Around this time, we took a break at a level spot and I asked Chenay what she thought of the hike so far. I ended up hanging a ribbon at that spot with her honest (but strangely enthusiastic) response. 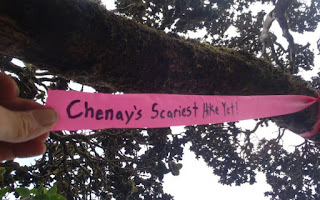 Once moving again, the ridge stayed narrow, but never dangerously so. I looked back to check on Chenay’s progress and observed that we were being engulfed by clouds.

This meant no more views, but more importantly, it would mean no preview of what was ahead of us on the ridge. I was fairly confident that there would be no surprises left, but an unexpected notch, deep uluhe patch, or steep final incline would be very time consuming. Not good as we were soon past 4pm. 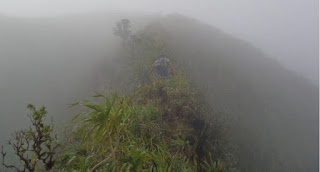 We continued on… had a brief section of uki uki grass…an eroded spot…and then at 4:30pm I no longer felt the wind. With visibility severely limited, I could only assume that meant I was at the summit. Sure enough, I noticed a faint swath leading left-right, the same one we used a few days prior. A very inglorious conclusion to this climb, but I was mainly glad we made it safely. A moment later, Chenay joined me and got the less than scenic shot of me with the ridge in the background. 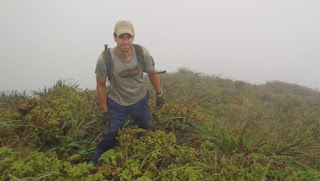 With familiar territory ahead, we took a break for “second lunch” before heading NW along the Koolau summit ridge, bound for another windward “ridge” that would drop us back down to Kaneohe. We were socked in for the whole summit section and had a few slips in the mud along the way. With darkness setting further in with each step, we made to our descent ridge at 6:30pm. It was raining on us by this point, but from there we had railings to guide us all the way down to the bottom. In fact, we never once turned on our headlamps as we were enjoying the thrill of the unplanned night hike. Halfway down we finally broke free of the cloud cover…the rain let up….and we had killer views of nighttime Kaneohe. It was then that we started calling for rides which we would need to back to our car. (It was New Year’s Eve, so getting a taxi seemed a long shot.) None of the “Bushwhackers” were in the neighborhood, but one of the “Goonies” lived nearby, so Chenay called her son who graciously agreed to come help out his mom and the guy who tried to kill her.  At 7:30pm we met up with Josh (thanks again!) who shuttled us back and saved us a good deal of street hiking.

Home by 8-something. Quick shower and dinner, and then we were back out by 9:45pm for a fireworks-viewing hike with some of the gang. Despite the fatigue, we still mustered up the energy for some mixed-fantasy-world battling between a Teenage Mutant Ninja Turtle and Yoda. Now that’s how you wrap up a year. 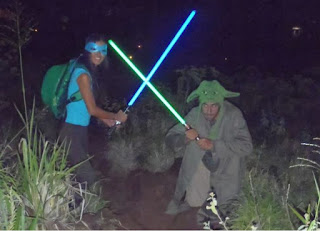