Kulepeamoa Windward (aka The Big Nasty) by Pete Clines

I never thought I saw any windward ridges between Puu O Kona and Lanipo that looked climbable….but I WANTED there to be one. So to force the issue, Chenay, August, and I went on a scout trip to Waimanalo last weekend for some sight-seeing. Most of what we saw was utterly horrible, as evidenced below. 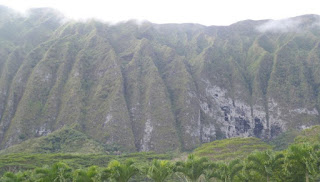 Vertical ridges tightly packed together, with majorly rotten rock throughout. While hopefully observing each ridge, a group of church-goers stopped to talk with us. Upon learning why we were staring at the mountains, one of them mentioned that some “professionals” had tried unsuccessfully to climb some of those ridges in the past. Not sure what makes a “professional” but the challenge was definitely on. We agreed it would be another “dragon-slaying” adventure. (Back-story: dragons live in dangerous, remote areas like this and guard against intruders. Completing the adventure means slaying the dragon. Got it?)

While almost all of these ridges were quickly dismissed as suicidal, one caught our attention as the “best of the worst.” It blended in with its neighbors and was tricky to distinguish when we moved to various viewing places in ‘Nalo, but it had sufficient grade and vegetation to give us hope. It also had a very fortunate (for us) feature that the careful observer would be able to see from both up top and below. Can you spot the strategically located palm tree just to the right of our chosen ridge? 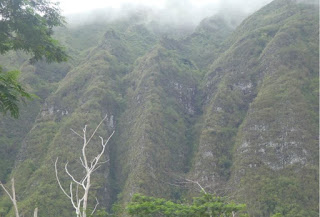 Last Sunday’s scout hike ended early since Chenay had to go to work. But before we left, we had time to guide in our target, and once there, I got to free-climb a couple hundred nearly vertical feet to get above the ugly rock face at the base. While descending back to the others, I laid out webbing to aid the ascent on the next attempt. It also served to mark the route I carefully picked to avoid the worst of the rock. No stranger to the injuries caused by falling rocks, August had moved him and Chenay to a spot further makai from the wall while I occasionally sent chunks plummeting down - some intentionally to stabilize the route….others by accident. In fact, August commented that he heard/noticed rocks falling from other ridges that I was NOT even on. Scary.

This past Sunday, the weather was rather foul (vog, sticky, low clouds) but like most couples, Chenay and I get off on risking each other’s lives so we decided to go for it anyway. The wiser man, August opted for a leeward hike that would land him above us somewhere. Chenay and I began from the ‘Nalo “trailhead” at 9am. Pardon my vagueness here, but I’d rather not incriminate myself by discussing our starting point.

The approach is fairly gentle but involves pushing through a forest of close-grouped strawberry guava. We mostly picked the path of least resistance, using occasional views of the aforementioned palm tree to keep on course. 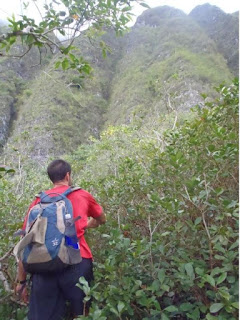 By 9:35 we were at the base of the wall, and I let Chenay go up first using the webbing I laid out last time. She is far lighter than me, and had less chance of kicking a rock loose on me than I on her. But I was still careful to space us out in a way that I was never directly below her. Christmas berry and other questionable handholds slowly got us to the top of this first wall. The view east gives an idea of the grade we were on since these ridges are similar and parallel each other. 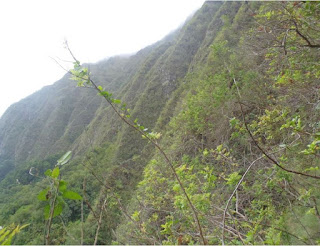 Once at a relatively level spot, my turnaround point from last week, we confirmed the presence of a dragon. He seemed to have just woken up, and we knew he would proceed to make things difficult for us. 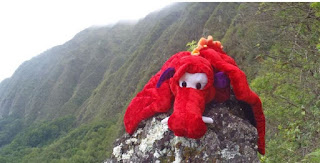 After a short rest, I took the lead, re-supplied with the webbing from below. (I now had 250’ total webbing in three length, plus 50’ paracord, all in the event that we needed to abort the climb and head down fast.) Since the route was so steep and rock fall risk so ubiquitous, I had to be sure to keep Chenay on my exact course… without being close enough to bean her. As a fix, I knotted a length of webbing to my pack and dragged it behind/below me for most of the climb. When needed, I also tied it off to tree roots to aid her in climbing up to my position. (We also wore bright colors to be able to easily spot each other at all times.) 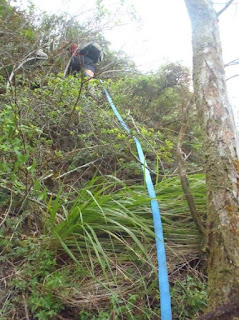 When we passed the (estimate) 1000’ mark, we paused for “first lunch.” I gave Chenay a flatish spot above me, and pinned myself against a clump of “trumpet” trees to avoid a slip while enjoying my sandwich. But of course the dragon did would not let us linger, and it flew in to break up our rest. 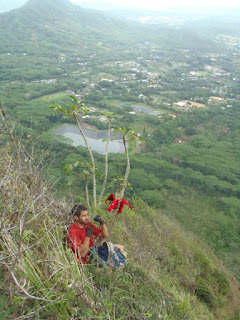 With first lunch over, we pressed on, knowing from our scout trip that we had (at least) 4 tricky spots ahead of us. The zoom photo below (taken last week) shows their locations. The rock face at ‘1’ is hard to see from that angle, but looked like a possible deal-breaker from others. In person, it was handled with some caution and we continued on. 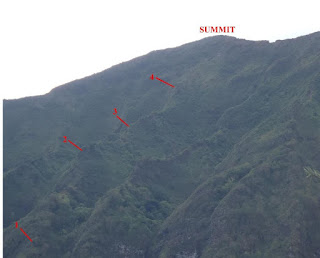 Not long after, I noticed the palm tree in the hanging valley to our right. Awesome! We were already slightly above it. But soon I topped out on a small mound and saw tricky spot ‘2’ looming large. 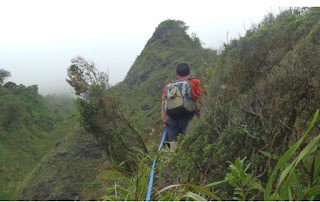 I turned around to see what Chenay’s reaction would be. Before I could say anything she asked, “We have to go over THAT?” Knowing I would not be allowed the shame of defeat, I continued along a short level stretch pondering why we were not at the beach or watching a movie together. 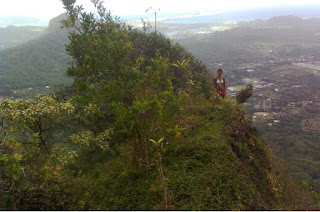 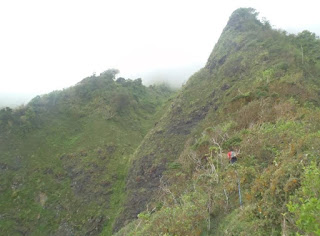 While my mind wandered, Chenay took pictures of just how nasty that ridge became as you got closer up on it. Not much in the way of handholds, and we both slipped quite a bit. 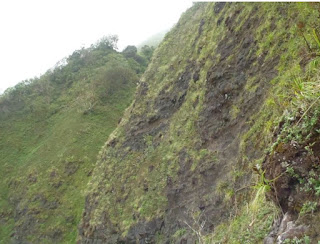 But I managed to top out on tricky spot ‘2’ and was able to drop my 70’ webbing to Chenay to help her “git-r-done.” Still safe, we prepared for tricky spot ‘3’ which we expected just ahead. 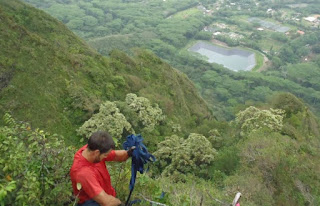 A quick look to our left and I was almost dizzy from the steepness of the ridges. 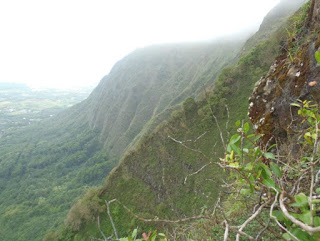 While snacking below tricky spot ‘3’… my expression conveyed my waning optimism. 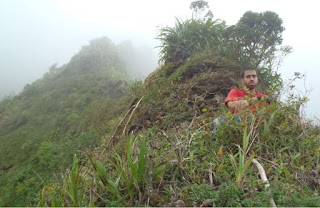 Going up ‘3’ involved one of the more narrow spots of the climb, and the ridge was breaking apart as I crawled over it. I instructed Chenay to center her weight over the hump, and inch her way along. It was at this spot that she slipped and briefly dangled over the east end of the ridge for a few tense seconds, before re-acquiring the ridgeline. (Whew.) 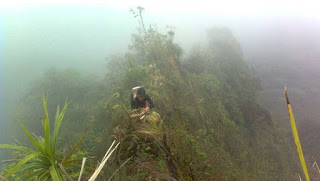 With the “three humps of 3” out of the way, tricky spot ‘4’ – possibly the steepest face – lay hidden in the clouds in front of us. The photo below was taken from the Koolau summit on a much clearer day, and shows the challenges, particularly nasty number ‘4.’ 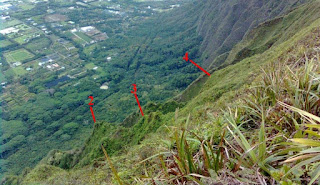 Engulfed in clouds, we climbed up the broad face at ‘4.’ We began head-on, but vegetation dwindled and the angle increased as we got higher, so I led us on a west-side contour into stronger handholds. (Mostly uki uki grass) Our zig-zag approach worked, and we were able to claw and pull our way back onto the crest of our ridge. In no time, the steep but broad slope leveled off, and at 4:00pm we found ourselves EXACTLY at the summit of the Kulepeamoa trail. Relief! Below is a view of what we would have seen if it was not so cloudy. Our ridge is the one just right of center, and concludes where the photo was taken from. The reference-point palm tree is visible dead-center. (Photo from prior visit) 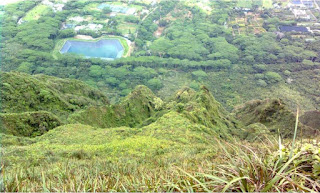 We were more than due for “second lunch,” but before we could relax we had to ceremoniously slay the dragon that tried to keep us away. Chenay took first whack, and then I made the kill.

With unnecessary mutilation of a child’s toy out of the way, we devoured our sandwiches. And then right at 4:20 (ironic) August and Drew emerged from the clouds at the east end of the summit. They found Chenay curled tightly in a fetal position and me sobbing and sucking on my thumb. Well, not quite. But they did congratulate us and sat down for a break. Upon seeing severed dragon parts lying about, August offered to take a pic of us with our kill. 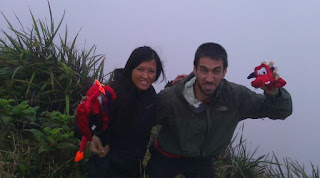 Sometime before 5pm we packed up and made our way down the (leeward) Kulepeamoa trail. In clouds much of the way….then some beautiful dusk views including a voggy sunset….and finally a headlamp-enabled descent through dark forest. Back to Chenay’s car by 7pm. We thanked August and Drew for their company on the way out, then hustled to retrieve my car from the back woods of Waimanalo before someone else discovered it and did it for us.

With car safely recovered, we stopped for filling burritos in Kailua to reminisce on the adventure before getting home around 9pm. I was calling this one “Kulepeamoa Windward” for geographic reasons, but with the constant rock fall dangers…relentless uphill…crumbly hand and footholds….and uncertainty of the route ahead…..Chenay thought “Big Nasty” was more fitting. I agree.