In January of 2003 I climbed up to Konahuanui from the Pali Lookout by way of the “Notches” ridge. My climbing buddy back then, Brian, was naïve enough to join me. Except for a tense moment when a handhold-rock busted loose on Brian while in a crucial spot over a death drop…. we had a fantastic time with lots of excitement and killer views on a cloud-free day. We exited via the seldom traveled (overgrown) Lulumahu Ridge and looped back to the Lookout.

This past Sunday – almost exactly eight years later – I got Laredo (Murray) and Duc (Ong) to join me for another round of adrenaline. This would be their first time on this ridge. We met at the Lookout and began for the Notches at 8:30 or so. Below is a map of the route, with the orange dash marking the hardest part. This picture was taken from the summit of Lanihuli East – the equally nasty ridge across the valley. 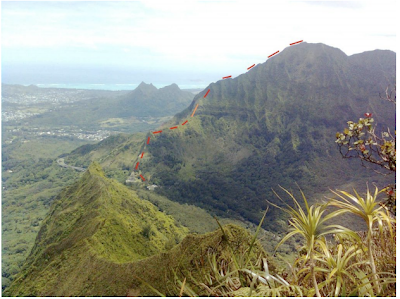 We got to the ridgeline in no time, and were treated to a blast of wind. We realized the gusts would keep us cool as we climbed, but they were also strong enough to make it risky. At times we could feel ourselves being pushed around - not good when you are traveling so near to the sheer windward drop. And the drop on the town side wasn’t much safer. But we had nothing else to do that day…We easily dropped into - and climbed out of - the first notch. There are lots of handholds. The second notch was trickier, but someone has roped it up real good making it reasonable. Back in ’03 there was no rope, and I remember Brian and I climbing halfway down before jumping to the bottom. At that point I remember we joked about being committed to reaching the summit. 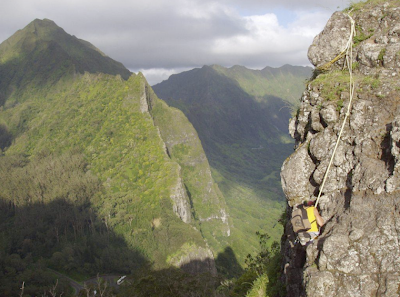 Following the second notch, the ridge stays narrow but it also levels off for a stretch until you get to “the Nipple” which is a prominent feature that needs to be climbed. Below is a picture of Laredo and Duc on top of the Nipple. In the background in the photo below is the vertical wall that stops most summit attempts on this ridge. The guys are smiling because they know I volunteered to go first. 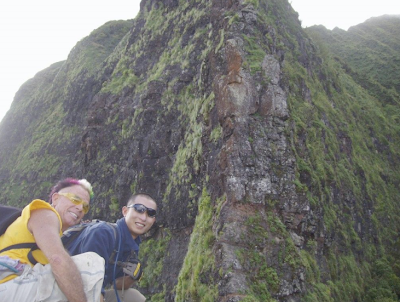 A hefty backpack and high winds conspire against you here, so as in 2003, I dropped my pack and tied a long rope around me. I also removed my sneakers so I could get my toes in the cracks and minimize slipping on the wet rocks. I gave Laredo my camera to record the foolishness.

There is a rope in place along the upper half of this wall. But it is possibly the same one from back in ’03. We didn’t trust it much then, and I certainly wasn’t about to bet my life on it now, so I used it only as a guide. Mostly I was using my toes, finger, elbows….anything I could jam in the rocks or create friction with. At the top of the climb is “The Chimney.” Here you are sandwiched between two relatively featureless slabs of rock, and I shimmied up it like I was Santa. The photo below shows me just about to enter the Chimney. A fall here would be painless. The impact…now there’s the problem. 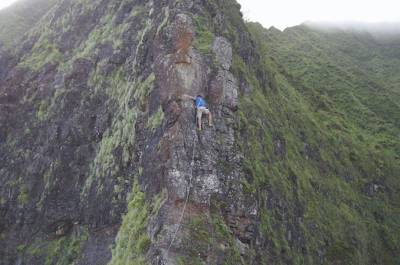 Upon successfully reaching the tiny flat(ish) spot at the top of the chimney, I got to work hauling up the packs. Bracing myself against one of the large boulders, I first pulled up my pack before tossing the rope back down to pull Laredo and Duc’s packs together. The wind was so gusty that I had to tie a heavy rock to the free end before sending it down to Duc. A couple prior attempts with a lighter object (my survival knife in the sheath) resulted in the rope and knife wildly going skyward. Luckily Duc’s knots held as I dragged the gear up the rocky wall. A few snags occurred on the overhangs, but it got done.

With all the packs behind me on the tiny flat spot, I began tying off the ropes for the guys to use in the climb. To be extra safe, I put up a second rope that would reach just below the chimney. As I was doing this, and standing in a sketchy spot above the chimney, I was startled to see a bag go flying over my head! The wind had picked up Laredo’s pack and launched it over me. I helplessly watched it sail down to the town-side…below the ridgeline. Crap. At this time Duc was getting into position to climb while Laredo was resting on the Nipple. He was probably wondering why his bag was now below him. 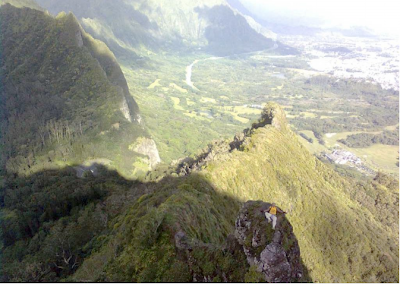 Duc worked his way up the wall and the Chimney, as I snapped a photo. 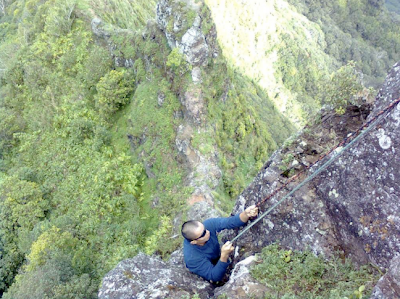 After Duc arrived, Laredo made his equally successful attempt. It was then that I learned that Laredo had over a hundred bucks in that pack, along with IDs! He insisted that I go back down and retrieve it. Just teasing. He repeatedly told me to forget it, but I didn’t want this on my conscience so I descended the Chimney and wall…climbed down off the ridge….and managed to get to a tree where his pack got hung up. Even found the water bottle that had flown out.

Relieved, I got back to the ridgeline with a little maneuvering, and made my second climb up the wall. Much easier with the ropes installed! Back together, I climbed several feet above the others to get this look at the top of the Chimney. The boulder on the left was my “brace” when hauling the packs. 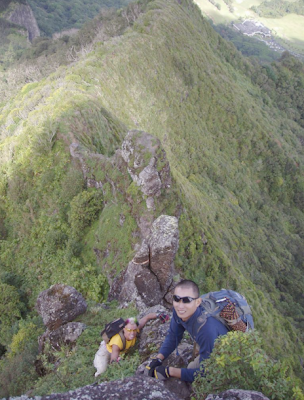 We pressed on, reaching another tricky section. We were on a narrow spot and were blocked by another rocky wall. Going over or to the windward side was not a safe option, and the town-side route wasn’t any better. But this was how we would go. This was where Brian slipped the last time, and that memory haunted me as I looked at the death-drop below. So I took off my sneakers and pack (again) and worked my way along a near-non-existent ledge, digging in my toes as I clawed above for handholds. At one point I shoved my knife in the wall to get a momentary foothold and then scrambled up to the ledge above. Then I sent a rope down for my pack…and then Duc and Laredo climbed up the rope which was now affixed to the lone anchor there – a suspect looking rock. With that out of the way, the ridge was more agreeable again to visitors, and we charged up through ie ie and other low vegetation. 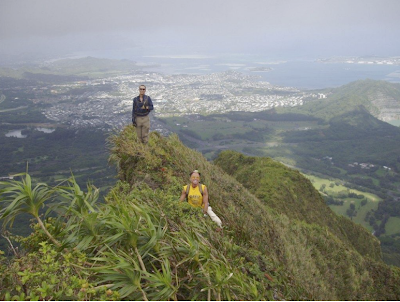 We soon passed the junction with “Konahuanui Windward” – a spur that I tried (unsuccessfully) to climb several years ago. The upper portion was just too steep with nothing solid to hold. Soon after this junction we reached a flat spot and took a break to enjoy the views. Following the break, we continued upward, passing a small notch at ~2500’ and a steep wall at ~2800’. I remembered this wall from before. You need to hoist up into a small tree and pull at uki grass and other such things to get above it. With that accomplished, we could taste the summit. 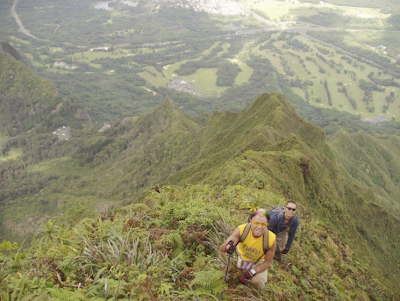 Unfortunately the summit tasted moist. The clouds began to collect as we got nearer, but we soon passed the Piliwale junction, and then saw the “three pinks” marking the terminus of the Club hike from the town side. We did it - and ahead of schedule! Despite messing with ropes and my detour into the valley to fetch Laredo’s pack, we still summitted at 12:45 – 15 minutes ahead of goal. No views, and it even misted on us a little, so we just used the time to have lunch before prepping for the descent.

I had climbed Piliwale Ridge in September 2002 and did not particularly care for it. The upper parts were really overgrown at the time and progress was scratchy and slow. I never returned. But with all the recent use of this route – particularly August who cleared on the way up last summer – we were treated to a pleasant swath on the descent. This would be Duc and Laredo’s first time on Piliwale, and I had to explain how much uglier it used to be. And once we got down to the rocky parts – the ones I like – we were babied with long lengths of fresh new ropes. Before, I just remember old, rotten cables. So even though going down steep ridges like this can be harder (since you can’t see your footing and gravity is pulling) we had no problems. Just took it slow. And once we were below ~2500’ the views came back as we dropped below the cloud line. Great views! Below is the exposed stretch above the (Piliwale) notch. 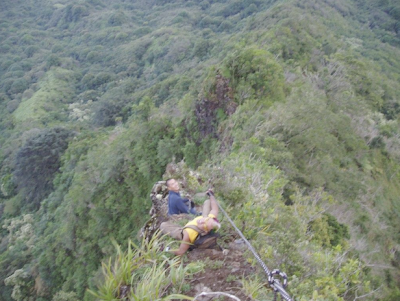 The ropes were certainly helpful (thank you to the installer) but getting into and out of the notch is certainly doable by relying on the strong trees in the area. And Duc and I even used a welltimed leap to get across one gap in the notch…to avoid going down lower into it. Rainbowman, meanwhile, said something about liking to go down and we left it at that.

With all of us up on the town side (safe side) of the notch, we sat down to finish lunch and soak in the views. It was then that my phone rang. August was stuck in Vegas for work and he must have sensed what we were up to. He guessed correctly on his second try and was obviously bummed to be missing out. See, only hardcore hikers would prefer to be sweaty and dirty on a crumbly ledge than in the “City of Sin.”

Break time concluded, we departed the notch and made our way down the mellow trail to eventually meet up with the Maunawili Demonstration Trail. What exactly it was demonstrating was fodder for our conversation as we took one last break there. Then we set off towards the hairpin turn parking area at a brisk pace….turned left on the connector just before it….and followed it to the “Old Pali Road.” We stopped along the way to check out the ridges we climbed. Below is Piliwale, with the notch directly above Laredo. 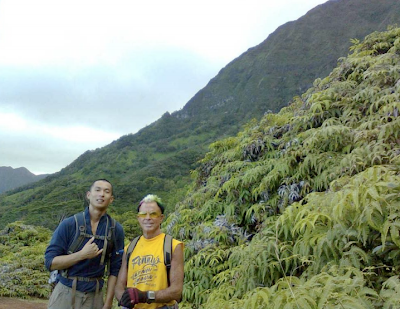 The road brought us back to the Pali Lookout at 5:45pm
Posted by Oahu Hiker at 1:01 AM